Home / Game Reviews / After an Hour – Metroid: Other M

After an Hour – Metroid: Other M 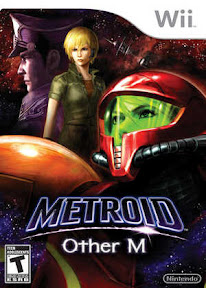 After about an hour of playing Metroid: Other M for the Wii, I have a few first impressions to share with you. First off, lets be clear about something: these are merely first impressions and are subject to change as time with the game lengthens. Now that we’re crystal on that…

Metroid has undergone a few different styles of play. The first iterations of the series were 2D side-scrollers. Then came the age of FPS for Samus with the Prime trilogy. Now we’ve got sort of a mash-up of styles with this newest game. Its predominantly 3D third person action, with a first person mode for searching and precise targeting (i.e. shooting missles at bosses and finding secret items, etc.) in which you point the Wiimote at the screen and manually target. Much of the beginning of the game feels a little like Super Metroid, and that’s not a bad thing at all. The controls work well but not perfect. In regular 3rd person view, you move your feet with the D-pad and shoot the direction you’re aiming. That makes sense, and yet, I keep running into geemers whilst trying to shoot them. Wtf is wrong with me? 3D movement is much better with an analog stick, and I wish I was allowed to use one, but I’m not. It does have auto-targeting, which helps to alleviate the problem, however. I stood in a room, facing the center, and didn’t move once as swarms of flying buggy jobbers flew at me from all directions. I just spammed my Beam Cannon and they all dropped, one after another, without ever touching me. Auto-targeting can be your friend. For all of you out there who hate auto-aim or want to play on “expert” or whatever: too bad, you can’t nor should you. The targeting with a D-pad would be complete balls without the “auto” part of it. You’ll just have to deal like I am.

As for her armaments, you’ve got ’em all from the beginning of the game. This is not usually the case. Rather than have to find and equip your weapons throughout the game, you gain authorization to use them. After the first hour (ish) I have gained the use of missiles and bombs. I’m sure the rest will soon follow. Also, you start with your Power Suit. I’m not sure if you’ll acquire the Varia Suit, Gravity Suit, Phazon Suit, etc. later in the game or if they’ll even be necessary in this story.

Right, so thats the biggest difference between Other M and the rest of the series: the story. The game takes place immediately following the events of Super Metroid (SNES) and has a pretty swell intro showcasing that ending and leading into the beginning of this one. I’m still on the fence as to whether or not I approve of all the cutscenes and dialogue there has been so far. I daresay I’ve spent equal parts playing and watching thus far and I’m not sure that I like that.

Also, Team Ninja (Ninja Gaiden/DOA) developed this Metroid and we know what that means: Samus is a brickhouse. Sure, with her Power Suit on you can’t tell. But she’s in the Zero Suit in the beginning… Sorry, but it HAD to be brought up. So far, I’m excited about this game. It’s got all of our attention and we’re all looking forward to putting time into this title.

Any of you out there playing the game? What are your thoughts on it so far? Share with the rest of the class!