I had two choices the other night: Devil, or The Town. Both have gotten decent reviews and are directed and/or produced by reputable filmmakers. However, each had one characteristic that I hate: M. Night Shyamalan is the obvious one for Devil; for The Town, it’s the exaggerated Boston accent that I have been aware of since first seeing The Departed in 2006. I personally have been to Boston, and the everyday downtown Boston people that I met did not speak with that accent. I should be clearer though. What I hate is not just that the accent is overdone, but that whenever a character from Boston is used, they must have this accent; otherwise the audience will not know they’re Boston apparently. The same goes for when characters from New York are introduced into movies/TV shows. They all drop their R’s and exaggerate their vowels, just so that we know they’re from New York. Stop it. I’ll be seeing The Town soon though, so I hope I’m proven wrong.

It is a bad sign for American cinema when our filmmakers are becoming so lazy that they feel the need to outline the plot in the form of soliloquy as if the audience were a bunch of drooling idiots. This occurs at sporadic moments throughout the movie in the form of delightfully cliché character, Ramirez (Jacob Vargas). As the movie opens with 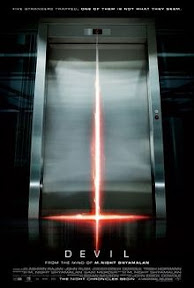 an upside-down shot of a very gloomy Philadelphia – which when you think of it, is pretty redundant – and a storm, prominent on the horizon, Ramirez describes a story that his mother would tell him when he was a child. According to his mother, the Devil would periodically roam the earth before finding people that he would torture and murder before sending them to hell himself (you have got to respect a guy who takes out the trash every once in a while). Oh and apparently, this would always start with an obligatory suicide, why? No reason is given. So guess what happens? Yup, a person leaps to their death from the high-rise onto a bread truck, and five strangers with shady, criminal pasts are subsequently tortured at the hands of the Devil in human form. Why was this soliloquy necessary? It served no purpose other than to reveal the plot; something that movie was going to do anyway. There was no subtext, no underlying meaning, it was not mythic in the slightest; they were just the rants of an old bitch who scared the shit out of her son!

It is during the introduction and throughout the rest of the film that they try to be symbolic and thematic. The number of the building in which the movie takes place is 333; half of 666 (tee-hee). The name of the bread truck that the jumper falls on is Bethel Bread and the road on which Detective Bowden’s family is killed (more on this later) is Bethlehem road. Not only is this movie devoid of any subtlety but is also dealing in the business of marketing extreme unnecessary redundancy. The point I am making is that we already know the film is about the devil and we know what his plan is from the first five minutes in, making these references irrelevant.

The five strangers in the elevator are Ben (Bokeem Woodbine) the black guy, Sarah (Bojana Novakovic) the rich c*nt, Jane (Jenny O’Hara) an old bitch, Tony (Logan Marshall-Green) the war veteran, and Vince (Geoffrey Arend) the happy-go-lucky fuckwit. All of the characters are teaspoon shallow, and they are all horror movie clichés. Ben speaks jive when the shit hits the fan and is easily angered when one of the other characters addresses him as “bro”. Sarah acts like a scared rich c*nt. Jane acts like a scared out-of-touch old bitch. Tony is mysterious and quiet until he talks about all the awful things he saw in the war – oh, and since he’s a veteran, he has to speak in a very low 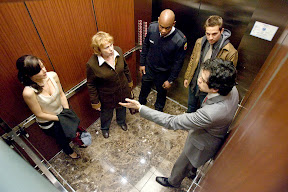 tone and very soft; it’s not like he was in Vietnam! Man up, motherfucker! Vince is there just to be annoying and to show the audience that the Devil is not fucking around, since he is the first to be murdered. I wish there was more I could say about these characters but honestly, there is not much too them, except maybe one and a half of them. Yeah, that’s right; I’m going to be cryptic about this.

The characters on the outside (of the elevator) are the aforementioned Ramirez, and the detective who comes on the scene shortly after discovering the suicide jumper, Bowden. Ramirez and Bowden are meant to be polar opposites, with Ramirez being the believer and Bowden being the skeptic (and great sexual tension that is explored over nine seasons and two films). After seeing a distortion in the video (or was it a potato chip?) that may or may not resemble a face, he begins to pray and tells everyone else that the Devil is among them in the elevator. Bowden does not believe in the Devil since his family was killed in a hit and run five years ago he cannot fathom any other type of evil in the universe that isn’t man. What’s worse is that it doesn’t take long for Bowden to agree with him. Remember when they discovered the face on Mars back in 1976? They still argue about whether or not it’s a face today. Yet in this movie, Ramirez comes to the conlusion immediately that the face in the static is that of the Devil, even though there is not one defining characteristic that would make anyone jump to this conclusion. His mother really screwed him up with those stories. Ramirez then continues his narration, detailing that any innocent people who tried to interfere with the Devil’s plan would suffer the same fate as his victims. Even though the audience could see the impending death from a mile away, it’s still necessary to have this guy feeding us the plot between every act.

The rest of the movie involves the investigation into finding out the names of the passengers in the elevator (mundane), the attempts of the firefighters and other personnel to breach the elevator (meh), and the revelation of the Devil. It should be noted that there is a scene in the movie – which is also highlighted in the trailer – in which there is a glimpse of a mummified person standing inside the elevator. There’s nothing to account for this, it just happens.

For a movie in the thriller genre there wasn’t anything thrilling that occurred in this film. Preceding the death of a character, either the camera cuts away or the lights go out. There wasn’t anything to satiate my primal desires as a filmgoer since my upper brain functions were systematically turned to mush as the movie progressed.

This brings me to the final dysentery-inducing portion of the film: the revelation of the Devil. Satan. Beezlebub. Lucifer. Angra Mainyu. J.J. Abrams. The personification of evil. The ultimateantagonist. The enemy of 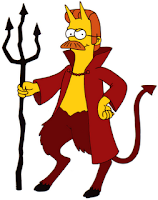 god and humankind….Is a stale pushover. There was nothing threatening about him, he had no presence, no charisma, he did not even say anything “biblical.” I was more frightened of Ned Flanders as the devil, and I was truly impressed by Gabriel Byrne’s version of the Devil in End of Days (1999), seriously. The appearance of the Devil in this film is another cliché these days of demons taking human form in film, even his voice. The worst part really was the dialogue. I’ll give my own rendition:

Devil: “Oh haaaaay, I’m the Devil, ur going to hell”

Devil: “Damn, I really wanted you.”

That’s right, according to Devil, if you just say “sorry,” then you’re all good in his book. He’ll give you back your life; wipe the slate clean, no problem. This scene with the devil was the only one that truly infuriated me (disregarding a scene featuring the Philadelphia Flyers). I also can’t decide whether I dislike it for being incredibly shallow and ultimately superfluous to the conclusion of the movie, or whether I dislike it for being written from an obvious Christian perspective. The devil is represented in many different ways across different religions, but this scene seems to centralize him and constricts him to only one, diminishing the image of him being a sweeping omnipotent force of darkness and evil.

By the way, that last line from the Devil was actually in the movie. Yeah, I laughed so hard the gun came out of my mouth. Just thought I would let you know. See you in hell, fuckers.

Previous: Should I Be Excited About This..?
Next: Help Children. Support Gaming.