Home / Official Editorials / I Got Your Bullet Hell Right Here

I Got Your Bullet Hell Right Here

Posted by: Alex Moshofsky on September 16, 2010 in Official Editorials Comments Off on I Got Your Bullet Hell Right Here 1,022 views 0

I’m about to share with you two beautiful things. No, not two photographs of me in a dress. That is far from…. oh god, I think I’m going to be sick. [Edit: returned after 20 minutes of dry heaving]. Ok so I’ve got two great things that you may or may have not already heard and/or seen. You like how non-committal that sentence was? 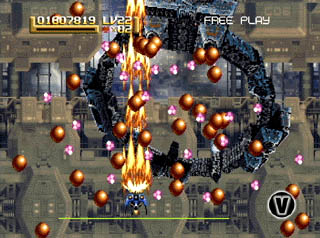 I enjoy a good Bullet Hell shooter. Sure, I may suck at them and want to scream and throw things whenever I play them, but for some reason, I still play them occasionally. If you’re asking your screen (and inadvertently, me) what a Bullet Hell game is, its a subgenre of shoot ’em up that fills the screen with absurd amounts of bullets and the game becomes just as much dodging, weaving, and pattern memorization as it does shooting. They are ridiculous. Fortunately, your “hitbox” is usually quite small, so it’s a little harder to die than it looks. But not by much.

1.) Game developer Treasure is finally bringing Radiant Silvergun to the Xbox 360. They had a followup called Ikarugathat they released for the Gamecube and, subsequently, Xbox Live. It was awesome, but Radiant Silvergun is hailed as one of the best Bullet Hell games to reach America. It was originally brought from arcades to the Sega Saturn and is worth a lot of money if you have a copy. Radiant Silvergun won’t be coming to us for a while, but it’s been a decade, I can wait a little longer, just knowing that its coming.

2.) At PAX just recently, a game was showcased from developer One Man Down, called Solace. This is a slightly less insane Bullet Hell game. But where it lacks in insanity, it more than makes up for in beauty. In Solace, music and visuals take a front seat to frustration and nerdrage. How do I put this? Ok, if Rez and Galagahad a baby, but then put it up for adoption and it was taken in and raised by Flower, you might have Solace. The musical and visual themes in Solace are centered around the five stages of grief: Denial, Anger, Bargaining, Depression, and Acceptance. Its very well done and well worth a playthrough. Don’t take my word for it, though. You can go to the game’s website and download a PC demo of it here.

Solace dances that fine line between me wanting to stab my PC and just wanting to drift into a soothing slumber. That’s an interesting place to be, let me tell you.