Home / General Musings / Its Like They Watch Our Show…

Posted by: Alex Moshofsky on September 30, 2010 in General Musings Comments Off on Its Like They Watch Our Show… 904 views 0

As you have probably already heard, Oddworld: Stranger’s Wrath is getting a complete HD makeover and being re-released next year. That’s all sorts of awesome, but it doesn’t stop there, my friends. I’ve just found out that we are not only getting one of GR’s favorite titles in HD, but TWO. That’s right! Ubisoft has just announced the complete HD remastering and re-release of one of the unsung heroes and GR favorites of the last generation: Beyond Good & Evil! You can shit yourself now. I put down newspaper, don’t worry. Sometime next year, we will be getting this title on XBL and PSN as a full game digital download. No exact date or price point has been given for it, but as soon as that info is available, we’ll let you know. 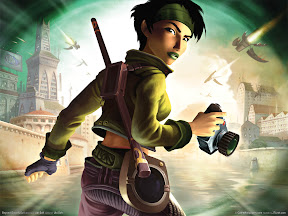 You need to understand how excited I am about this. I have what I refer to as “Video Game ADD“, which keeps me from finishing games. Not ALL games go unfinished, of course, but many do. Now, that being said, its almost unheard of for me to ever play a game twice through. I don’t mean like SFIV or something like that that I can beat in 20 minutes. I mean 10+ hour games. They just don’t get a replay from me. Ever. I think I can count on one hand the number of games that have ever gotten a full second run. Well, Beyond Good & Evil is one of those few honored games. It gets better, though. It is, in fact, the ONLY game that I’ve EVER played (NES titles notwithstanding) a full three times through. Now, to some of you who consistently replay games, that won’t seem impressive. But for me, the odds of it happening are equivalent to that of me fighting a giant squid with my bare hands while baking a cake 2 miles below the surface of the sea; it will probably only happen once in my lifetime.

Beyond Good & Evil will likely go down in history as the only game ever created (again, 8-16 bit games excluded) that Alex ever played not twice, not thrice, but FORCE (see that?) times! When I conquer the world, Michel Ancel will be spared.