Disgusted, outraged, and sickened. Those words were only a fragment of the plethora of emotions that I normally felt after seeing movies based on video games. There have not been many of these films; I could guess a few reasons as to why. The outlandish plots and an audience that would be more or less niche. Like Ferengi merchants, Hollywood studios seem to make video game-based movies ONLY for the meager profit, shoving creativity down the proverbial water hole. Bob Hoskins said that filming Super Mario Bros. (1993) was the worst experience of his career. Mortal Kombat: Annihilation (1997) has become a youtube sensation…for having one of the worst line deliveries in movie history. Mortal Kombat (1995) and Resident Evil (2002) are two movies based on video games that have been commercially successful and have received somewhat mixed reviews (This is saying a lot). Finally, with the addition of Scott Pilgrim Vs. The World, gamers have a movie that they don’t have to be ashamed of – oh, and it’s a good comic-to-film as well. 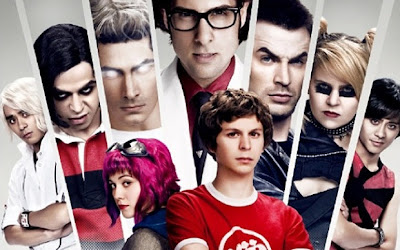 Scott Pilgrim Vs. The World is based on the graphic novel written from 2004 to this year by Bryan Lee O’Malley. The character of Scott Pilgrim (Michael Cera) is a 23-year old bass player for the band “Sex Bob-omb” in Toronto. He meets the girl of his dreams, Ramona Flowers (Mary Elizabeth Winstead). The movie follows the same plot as the graphic novel, utilizing a plot similar to that of Double Dragon (1987) and River City Ransom (1989) in which Scott Pilgrim has to defeat a gauntlet of enemies in his path – in this case it is Ramona Flowers’ seven evil ex-boyfriends and their minions. Pilgrim is not the protagonist that we are used to; unlike Mario or Link his ending is not something audiences are accustomed to seeing in this type of story, but with the movie’s overall plot it was a good decision and it grounded the movie in some plane of reality.

I am happy to say that I enjoyed this movie very much. Director Edgar Wright has carefully woven the narrative of the graphic novels into the films and kept it’s image – literally – while still making it inclusive to people who are not familiar with the graphic novel but would still be able to recognize the video games that it makes references to from time to time. That being said, there are a number of these references covering games such as: The Legend of Zelda, Super Mario Bros., Guitar Hero, Sonic the Hedgehog, Final Fantasy, and the aforementioned River City Ransom and Double Dragon. At the same time, the movie is filmed and edited to resemble the pages of a graphic novel, including ‘effects’ like “KROWW” when someone is punched during a fight scene, or the “RIIING” of a telephone. 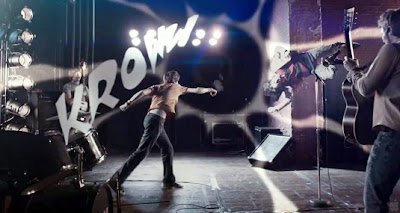 Thankfully, this is done in a way that is not intrusive to what is on the screen, and actually enhances the feeling that we are watching a comic book story unfold. The movie kept it’s flow and I didn’t feel like Wright was screaming, “HEY LOOK! THIS MOVIE IS BASED ON COMIC BOOKS! GET IT?” in my ear – Frank Miller, I’m looking at you, you arrogant twat.

All told, I would recommend this movie to any fan of comic books and/or video games. The movie is welcoming to people who are unfamiliar with these genres of entertainment. Though they may be lost at first, the movie definitely grows on the audience. Hopefully, this demonstrates to Hollywood that movies based on any genre can be well-received AND successful, as long as the work is put in. Here’s to hoping that this starts a trend of quality in video game movies, though I would hold off on the Metal Gear Solid and Mass Effect adaptations for now, we still have a ways to go.