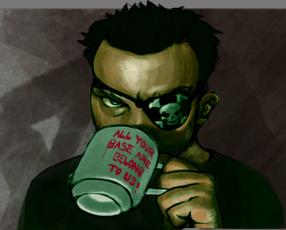 So just recently, an amazing thing happened to me that has never happened before. I finished all my games. Now, I’m notorious for not finishing games, thereby leaving myself with something to fall back on at any time, should I find myself bored. Now, this is not the intention when I leave games unfinished, but it IS a nice result. Usually, the reason I don’t finish something is because I see something shiny and have to play another game, regardless of how good or bad the game I’m currently playing is. For example, Elder Scrolls IV: Oblivion

is an amazing game. Just ask Jeremy. Hell, he might even stab you if you disagree with him on it. Don’t be fooled by mild-mannered Jeremy Salig, ladies and gentlemen. He might do terrible things if Oblivion told him to do them. Anyway, I was playing Oblivion and loving it, when suddenly, Gears of War

came out. Uh oh. Cyrodiil immediately lost its’ luster and all I could think about was murdering Locusts. You see, I have a major issue when it comes to focusing on one thing. I only do it until something else catches my eye. VGADD? Yeah, its a condition I just made up, but its a serious one. I have been working on playing only one game and seeing it through to the end, lately. I have been partially successful. The big problem now is that I have nothing left to play.

1. Go buy a new game
Now, while I would love to do this, I have no dollars. A sad result of having joined the statistical ranks of the unemployed recently. No dollars means no shiny new game. Sure, I could try selling my body for science or pleasure in an attempt to collect enough coin to go get myself a game fix, but I’m not convinced that this is a healthy route to travel. I love games, but I value my health.

2. Borrow a game from a friend
I’m working on this one. I recently borrowed and completed Darksiders

from Jeremy. He has offered up Borderlands

to me with high recommendation. I’m just not sure if I want a shooter right now. I know, I know. Its not just a shooter. Its like a first person shooter RPG type thing. I’m still on the fence about it. Sure, the game is there for the taking, but my drive to play it is low.

3. Replay a game
Fuck that. I don’t replay anything. Like….. ever. I might restart something, with the intention of replaying it, but the result is always the same. I love a good story, and once I’ve heard it, I don’t care as much about devoting 20+ hours to hearing it again. “But Alex, some of these games have multiple paths you can go, with branching plotlines and blah blah blah blah-” I don’t care. The main story is the same, so go stuff it. Regardless of how great Mass Effect 2

might be on a second playthrough, or Heavy Rain

with its Choose Your Own Adventureness, sloppy seconds just doesn’t interest me. In a delicious turn of irony, I do not seem to have as big an issue with this while watching movies. Sure, the first time is always the best for me, but I’m fairly sure I’ve seen Predator twelve times and its always awesome.

4. Steal a game
Ok, this is not a very viable option for two reasons. First off, I can’t steal from people. I mean real people, like friends and stuff. They are my friends. Why would I steal from them? You should be ashamed of yourself for even suggesting the idea. Besides, real people spend real money that they real earned (<–grammar check). When I have my things stolen, I get very upset. Why would I want to put someone else through that? Secondly, stealing from video game stores has become remarkably difficult over the past 10 years or so. Sure, there may have been a time when my scruples took a back seat to my wandering hands, but no more. Why? Mostly because the benefit no longer outweighs the risk. I’m no longer a minor, and its way too freaking hard these days. I have no problem with theft from big companies. They have plenty of money. I do have a problem with getting caught, though, and its way too easy to get caught nowadays. So yeah, stealing is not much of an option for me.

I’m sure I’ve missed an option or two. Perhaps something more creative than what I’ve suggested above. World of Warcraft

was always my go to game when I got bored, but now that its no longer an option for me, I need something. Suggestions? What do I do? What game do I go for? I need YOUR help, people! Surely you wouldn’t deny your old buddy some sage-like advice. Comment below and give me guidance!